We have exciting news to share with the Craft beer community today. Boston Beer Company and Dogfish Head are coming together to create the most dynamic indie craft-beer company of the 21st century.

We are bringing together two of America’s pioneering and award-winning independent craft breweries – with the industry’s best collection of brewing talent and a dynamic portfolio of craft and beyond beer brands – to position our company for success in an ever-growing and ever-changing world of brewing.

Dogfish Head has an amazing history as one of craft beer’s leading innovators. From their crowd-favorite 60-min IPA, their industry leading sours, and new releases like Slightly Mighty and Seaquench, to their craft distilled spirits – Sam and the Dogfish Head brand are beloved by American beer drinkers and highly respected by our fellow industry leaders. I have a tremendous amount of admiration for what Sam Calagione and his wife Mariah have built down in Delaware and I am thrilled to welcome them to our Boston Beer family.

Sam is a tremendous friend, innovator and brewer. We’ve dedicated our careers to brewing delicious and interesting beers. Just as important as our passion for brewing is our commitment to championing and preserving the independent, American craft movement.

“Sam is a tremendous friend, innovator and brewer. We’ve dedicated our careers to brewing delicious and interesting beers. Just as important as our passion for brewing is our commitment to championing and preserving the independent, American craft movement.”

Together we’ve stood shoulder-to-shoulder to help further our industry – from the early days of the Institute for Brewing Studies, the creation of the Brewers Association, the craft beer definition and the Independent Brewer seal – and advocate for indie breweries of all sizes. The Dogfish Head team has sponsored and promoted our industry’s values through events like the Extreme Beer Fest, SAVOR, Hill Climbs, and has raised hundreds of thousands of dollars hosting events for and with craft brewers’ guilds in many states and for the BA. And we’ve opened our warehouse to provide hops to hundreds of brewers during the hop shortage a decade ago, given loans to over 50 up and coming craft breweries, and provided coaching and counseling to hundreds more through the Brewing the American Dream Program. We will continue to work for the success of the indie craft brewing movement, now with a stronger, unified voice. 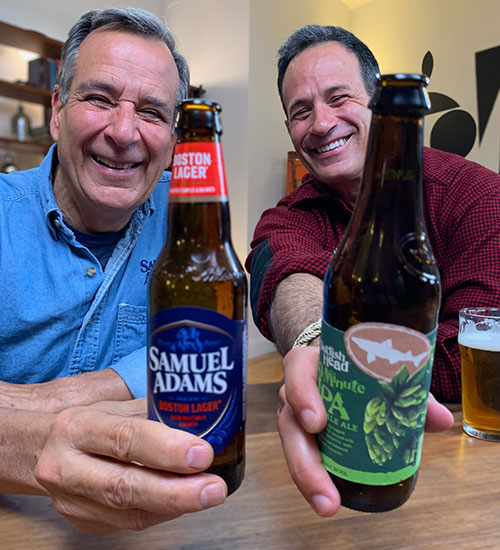 It makes us sound old to say it, but we have more than half a century of brewing experience between us. So we’ve seen the dramatic transformations the beer industry has experienced, especially in the last decade. As I wrote about two years ago in an article published by the New York Times, we’ve seen quite a bit of consolidation in beer. We’ve also seen a lack of transparency as two international brewing conglomerates gobble up regional brewers and market these faux craft beers as if they were still independent.

Our merger is different. This partnership provides an opportunity for us to join forces and successfully compete while retaining our position and leadership within the indie craft market. Sam will continue his leadership of Dogfish Head and together with the Dogfish team, the new Boston Beer Company will have the strongest portfolio of Craft and “beyond beer” brands in the industry – a powerful combination of high-end brands that span occasions and consumers. We’ll have a balanced offering of lagers, IPAs, sours, hard seltzer, spirits, and teas that consumers love and demand.

Even more important is the fact that we share a deep culture shaped by innovation, an obsession with quality, and values that span our communities and our co-workers. I realized how much we had in common back in 2011 the first time we collaborated, brewing a limited release beer called SAVOR Flowers for the BA’s annual food & beer event. We’ve also worked closely together as Board Members and active leaders within the BA community.

We are creating a company that will continue to push forward to drive the next generation of beer innovation and keep powering us to defy convention. I am so excited to see what else we can accomplish together. 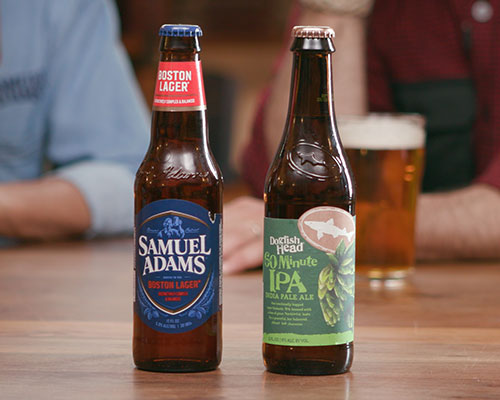 Boston Beer and Dogfish Head have tested the limits of what great beer can be and together with our talented co-workers, the best teams in the business, we will write some of the next chapter in American brewing.

“I realized how much we had in common back in 2011 the first time we collaborated, brewing a limited release beer called SAVOR Flowers for the BA’s annual food & beer event.”

Together, we’ll have two brewer-founders who will continue to lead brewing innovation.

Together, we’ll continue to be active and engaged leaders in the independent craft industry.

Together, our lineup of tasty drinks (IPAs, lagers, sours, tonics, spirits, teas and beyond!) and our awesome team of combined co-workers will deepen our brewing and distribution capabilities.

I cannot wait to get this partnership going and see what exciting collaboration the future has in store for a combined Boston Beer and Dogfish Head, the ultimate craft beer company.